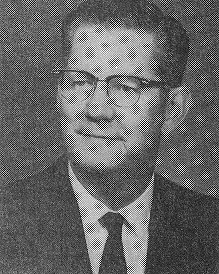 Biography:  Glenn J. Champ has coached teams in more than 700 regular and tournament games in 30 years of coaching. His career included three seasons at Dowell and 27 at Central City JH in Centralia. During his final 17 seasons, his Central City teams won 438 and lost only 332. Included in this were 38 conference, invitational and Southern Illinois JH School Athletic Association tournament championships. Eight of his 13 conference championship teams were unbeaten. His teams reached the SIJHSSA finals four times and place second in 1942. Glenn was a member of the Centralia High School Board of Education for 33 years during which time the famed Centralia Holiday tournament was organized. In 1974 he received a Certificate of Appreciation from the Greater Centralia Chamber of Commerce. Glenn passed away in 2003 at the age of 94. The Central City district gives an annual scholarship in his name.