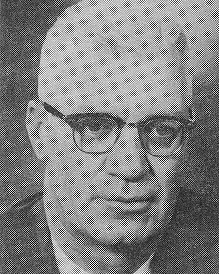 Biography:  Burton L. O’Connor served as basketball coach at Cornell College in Iowa from 1933-35 before moving to (Normal) University High School from 1937-1948. His teams in Normal won several regional titles and conference championships. His teams missed the one class Sweet Sixteen twice when they lost in close decisions in sectional finals. Burton was the University High School athletic director from 1937-1961. From 1961 until his passing on April 1, 1994, he was the athletic director at Illinois State University and oversaw the construction of Horton Fieldhouse and Hancock Stadium. O’Connor was a member of the Cornell College Hall of Fame, Iowa’s High School Basketball Hall of Fame, The Bloomington-Normal Officials Hall of Fame. As a player, Burt was the captain of the Iowa All-State Team in 1926. His Newton, IA team was state champion.  Burton passed away on April 1, 1994 at the age of 88.