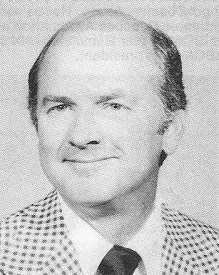 Biography:  Before his great basketball success, Dick saw success on the diamond.  He was drafted in 1947 by the Phillies and played 5 years in their system before joining the military in 1952.  While at Ft. Leonard Wood (MO) during the Korean War, Dick managed a baseball team that included a player named Whitey Herzog, who later became a notable big-league manager for the Cardinals.  At the time of his IBCA Hall of Fame induction in 1983, Dick Campbell had coached basketball for 29 years in Illinois.  He served as head coach at Noble, Newark, Elmhurst York and Addison Trail high schools.  Additionally, he served as an assistant coach at York, Charleston and the University of Illinois.  Through 1982, the teams which Dick was associated with compiled an overall 485-222 record.  In 12 varsity seasons at York, Campbell teams were 231-85.  Over this time, his teams won 10 holiday tournaments, four IHSA regionals, two IHSA sectionals, made two IHSA Elite Eight appearances and won five conference championships.  Dick produced all-state basketball players Jim and Jeff Dawson, Larry Saunders, Chris Schweer and Paul Schultz.  He was also a color commentator for the telecasts of the IHSA tournaments for several years.  Dick was a coach who was easily accessible to members of the media, fans, players, and other coaches.  In 2010, the (Elmhurst) York High School gym was renamed for Dick Campbell.