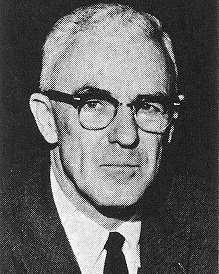 Biography:  John Harold Griffin (known to friends as ‘JH’) was responsible for putting the Teutopolis Wooden Shoes on the Illinois high school basketball map.  The inventor of the Teutopolis Press posted a 435-211 record prior to his IBCA induction to the Hall of Fame in 1976.  The town thought so highly of JH that the high school gymnasium was named after him. JH passed away on December 3, 1993 at the age of 87.