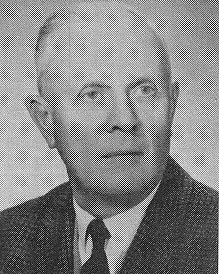 Biography:   Melvin Stuessy was a graduate of Woodstock Community HS and St. Edward’s University in Austin, TX.  After a brief professional football career with the Chicago Cardinals, Mel was asked to help coach at (Woodstock) St. Mary’s in 1925.  He stayed there for 28 years and won over 70% of his games in a school with an enrollment of 80 students.  Most of his competition was with much larger schools and despite this handicap, Mel took St. Mary’s to eight Catholic High School State tournaments.  In 1944 due to the war and the draft, Hebron and St. Mary’s were both coached by Mel.  When those two teams met in the finals of the district tournament that year, Mel became the only coach in Illinois history to be both the winning and the losing coach in the same game.  Coach Stuessy passed away on October 2, 1980.