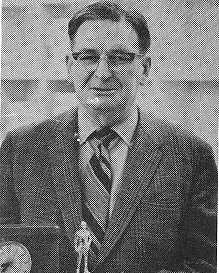 Biography:  Greg True attended high school and college in Wisconsin.  He then started coaching at St. Edward HS in Elgin in 1944.  For his first 11 years, he served as both the sophomore and varsity coaches.  Greg’s teams won 7 of 11 sophomore championships, 15 of 20 varsity championships and 14 of 19 district championships.  His combined record was 452-284.  Greg received many awards during his 20 years of coaching, but none has meant as much as when they renamed the St. Edward Athletic Field to “Greg True Field.”  Greg finished his career as a school administrator in Dundee, where he oversaw the creation of athletic programs at the newly opened Crown High School.