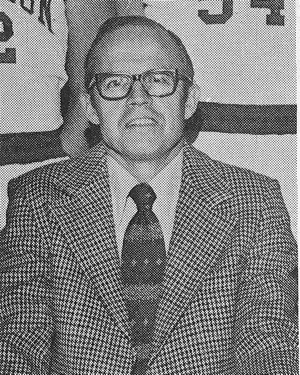 Biography:
Lee Cabutti is one of the top coaches to come from Southern Illinois. He attended Johnston City HS and starred on the SIU NAIA basketball champions in the mid 1940’s. Lee started his coaching career at Herrin HS where he won 94 games in five years. Lee moved to Champaign in 1956 and has had a fabulous career at that school where he won over 400 games in 23 years of coaching there. Five of his teams advanced into the Elite 8. Lee’s Champaign Central teams finished 3rd in the state in 1969. Lee was considered one of the outstanding defensive coaches in the history of Illinois basketball. At the time of his induction in 1974, Lee was still the athletic director and head coach at Champaign Central HS.