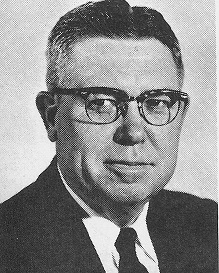 Biography:  Selmer O. “Sam” Storby led the Quincy Blue Devils to their first state tournament visit.  There, Quincy HS thwarted defending champion Thornton’s bid for the title 39-27 in the championship game.  Another Quincy HS visit to Champaign in 1935 allowed Sam to move on to Proviso Township where he served as the head coach from 1935 to 1948.  Storby’s first Proviso team made the school’s initial visit to Champaign.  Under him, Proviso won three Suburban League crowns.  Sam was a charter member of the Illinois Basketball Rules Committee, serving the organization for 20 years, two as their president.  Storby finished his career as the coach at George Williams College from 1948-1952.  Sam Storby passed away in August of 1976.