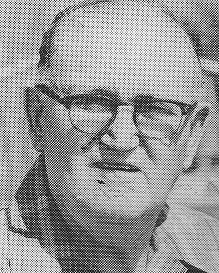 Biography:
Geoffrey “Red” Moore was a standout athlete at Benton HS.  At the time of his induction to the IBCA Hall of Fame in 1978 he still held the school’s long jump record of 22 feet, set in the 1920’s.  Red coached basketball (head or assistant) and football for 34 years at six southern Illinois high schools.  His basketball coaching career began at Goreville and spread to Ziegler.  He sent Ziegler to the state tournament in 1936.  Other stops included Eldorado, Carbondale, Elkville, and Carrollton.  His football and basketball teams at Elkville in the 1940’s and 1950’s made that tiny school into a state power.