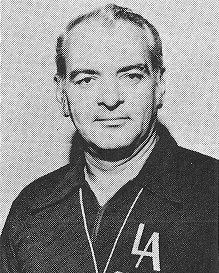 Biography:  Loyola Academy’s Bill Gleason was already a 22-year basketball coaching veteran upon his 1976 IBCA Hall of Fame induction.  A graduate of DePaul University, Gleason coached 2 varsity teams at the same time for 16 seasons as the Chicago Catholic League had teams for players who were under 5’9” as well as for teams of any height.  Bill coached them both!  In 1963 and 1970 Bill was the Chicago Catholic League Coach of the Year.  In 1965 and 1967 his teams were named best coached at the DePaul Holiday Tournament.  In 1967 Gleason was the Chicago Area Basketball Coach of the Year.  Bill spent time coaching at (Chicago) St. Benedict High School, (Chicago) DePaul Academy, (Wilmette) Loyola Academy, and the Chicago Hustle of the WBA.  Bill passed away at the age of 76 on October 29, 2004.