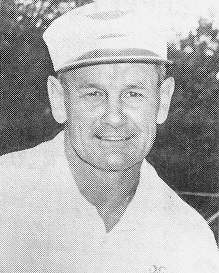 Biography:  It’s little wonder that a high school football coach who would play future pro football quarterback Zeke Bratkowski at pulling guard in high school would have made a niche for himself in another sport.  Danville’s Paul C. Shebby is just that coach.  The dynamic Shebby built Schlarman HS into an athletic power from 1948-57.  Although he coached all sports, his football teams were feared throughout the state.  His basketball teams made 4 state tournament appearances:  1953 (4th place); 1958; 1960; 1961.  His squads posted a 270-115 record over those years.  Paul finished his career as the athletic director and football coach at Danville HS.  Paul Shebby passed away on June 23, 2000.