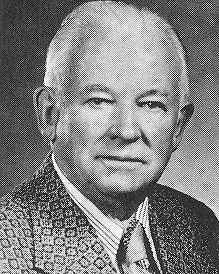 Biography:  Seely Johnston is truly a friend of basketball. He was the owner/operator of Johnston’s Sports Shop in Champaign for 54 years. Johnston served on many athletic committees for not only Champaign Central (he graduated from there in 1920) and the University of Illinois (a 1926 graduate) but also the city of Champaign, and the county of Champaign. A college classmate and friend of Red Grange, Seely has served as master of ceremonies for numerous Illinois athletic banquets and also Champaign Central banquets, many times serving as the chairman. He organized independent leagues for basketball (1929) along with baseball and softball. He presented the senior athletic awards, boys and girls, for over 41 years at Central HS.

In addition, he helped needy children who couldn’t afford athletic equipment or physical education supplies, many times selling at cost or simply donating it. His bids on athletic equipment at Central HS, specifically basketball shoes, lightened the financial burden of the athletic department. In 1998, the new addition was dedicated to Johnston by naming it Seely Hall.  Seely passed away on February 7, 2001.