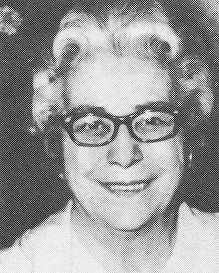 Biography:   The late Rose E. Ranstead saw her first basketball game in 1925 in her native Hartford City, Indiana. She was married to 1973 Hall of Fame member Barney in 1933. She was one of the chief reasons Barney is recognized throughout the state and northwest Indiana as one of the top high school basketball fans. She and Barney saw many games in the Batavia area when she attended games up and down the Valley (Fox River) by trolley. The third Ranstead son was baptized George Eugene for former Marmion Military and Loyola coach George Ireland and Dundee 1938 state champion coach Eugene DeLacey. Since 1964 she had seen every state tournament except in 1971. Rose and Barney raised 6 children while traveling the state to watch basketball games. Rose passed away on October 17, 1980.