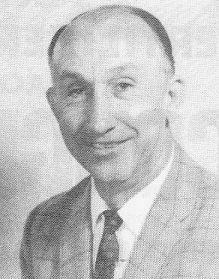 Biography:  For Louie Eovaldi, weekend winter nights had a special meaning. Beginning in 1934, Eovaldi spent many seasons comfortably seated behind the timer switches at a basketball game in Benton. He began his duties for grade school coach Frank Hayes and then moved on for high school coaches Don Anderson, Ralph Hooker, Ralph Davidson, and Rich Herrin. Eovaldi served as a teacher or principal at all but one of the Benton elementary schools.  Louie retired from administration in 1973. He said, “If I continue to feel as good as I do, I’ll be keeping time forever.” As an example of Eovaldi’s integrity, Coach Rich Herrin remembers a game back in the mid-1960s. With no time showing on the clock, Benton up by one, the opponents had the ball out of bounds. Herrin jumped from the bench and tried to tell Eovaldi the game was over. Eovaldi’s words with Herrin were’ “Coach, you take care of the coaching and I’ll take care of the clock.” Eovaldi did it in such a manner, Herrin knew he was wrong and returned to his bench rather quickly. Herrin never tried to tell Eovaldi how to run the clock again. Many coaches will tell you Eovaldi is the most honest, sincere, and dedicated timekeeper they had ever been involved with. At the time of his induction, Louie had been doing the time for 50 years.  Mr. Eovaldi died on March 11, 2003 at the age of 95.