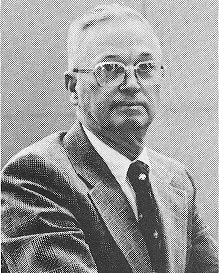 Biography:   For more than 40 years Dill Seymour of Seymour has been a timer for high school basketball, first at Seymour HS from 1935-44 and then at Monticello HS.  From 1945-48 Dill served as timer also at Monticello GS.  He also ran the clock in those years for three state grade school tournaments.  After 1948, Dill moved as timer to White Heath GS along with his high school duties.  For the 1972 tournament, Dill served as the Class A IHSA assistant timer.  In 1973 he was the head timer for the same tournament.  Dill passed away on February 20, 1996.