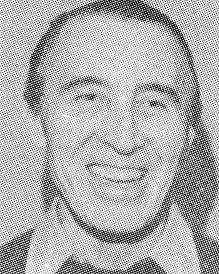 Biography:  Emil Hesse covered Champaign area high school basketball from 1949-1985.  he worked for the Champaign-Urbana Courier until 1967 when he joined the Champaign-Urbana News Gazette.  After his retirement in 1985, he worked another decade for the Mahomet Citizen.   He named all-area teams for the papers that employed him.  During those years, Emil would attend 50 to 75 games each year.  Hesse feels that the Hebron-Quincy state title game was his favorite while Gene Vance was his favorite player.  Hesse's philosophy on high school sports was "High school athletics is the last holdout for pure amateurism and enthusiasm and continually remains unspoiled."  Emil attended (Chicago) Bowen High School before attending the University of Illinois where he earned a Master's Degree in Journalism in 1966.  Emil passed away on September 15, 2005.