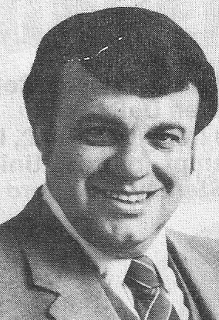 Biography:  Joe May was the voice of not only basketball in southwestern Illinois, but of all the sports. A long time radio and television veteran, May began in 1968 at WHCO in Sparta and moved to WIBV radio in Belleville in May, 1969. At the time of his 1983 induction, the president of Gateway Productions had broadcast more than 2,000 games including the state tournaments, St. Louis University basketball, McKendree and Belleville area colleges, University of Illinois basketball and has served as a member of the IHSA radio advisory board. His sports coverage also included play-by-play of football, baseball, boxing, soccer, track and cross country. Besides high school and college coverage, May broadcast minor league baseball in Springfield and had a syndicated television program, “The Whitey Herzog Show.” It’s no wonder May was a favorite of not only southwestern Illinois coaches, but those throughout the state.  Joe died on January 17, 2009 at the age of 67.