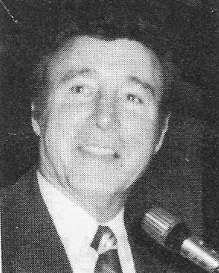 Biography:   Harry Heller’s basketball background gave him a solid base from which to draw upon as editor of the B’nai Brith Sports Lodge Bulletin for seven years. Three times the bulletin was named the top publication over a six-year period.  He has served as sports editor of the Sentinel Magazine. His coverage and closeness to the top Jewish athletes was outstanding and his research on all-state high school players has been widely received and recognized. Heller’s playing career began as a member of Herzi Junior High School’s Chicago champion’s team during the 1932-33 season. He was a starter on Marshall’s 1934 state tournament team as a sophomore. He attended Central Missouri State on a basketball scholarship from 1936-1940. There he was a member of the 1938 NAIA champions. In 1939, he was named to the Oklahoma City Christmas all-tournament team when his school won the title by defeating Oklahoma, Baylor, and Texas. In 1940 he was named to the MIAA all-conference team. He was the founder and a director of the National Athletic Camp for 25 years. Heller constantly spread the word about basketball in Illinois, wherever he was.  Harry Heller died on May 15, 2000.