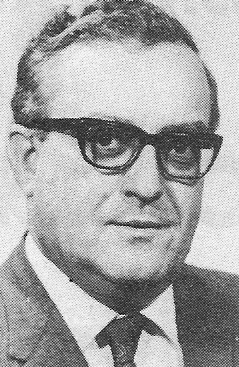 Biography:  Peoria Journal Star Assistant Sports Editor Bill Leighty built a legion of friends throughout Central Illinois for his coverage of high school basketball, Bradley basketball, and his attachments to the Amateur Softball Association and to bowling. Leighty also spent time with the Danville Commercial News. Leighty covered the Illinois State Tournaments form 1953-66 and Bradley University in 1949-1950. Leighty was present in the first meeting which led to the formation of the then Mid-State Eight. As a member of the Journal Star staff, Leighty conducted all-conference selection meetings and supervised many Mid-State Eight banquets. One need only look at Journal Star state tournament records along with area football, basketball, baseball, and softball record books to realize the many hours he labored on them to attain great thoroughness and detail. His record books are considered second to none. Twice he has been cited by the National Amateur Softball Association and is a member of the Illinois Amateur Softball Hall of Fame. Leighty has served as secretary of the Central Illinois Classic Bowling Association and has received the CICBA’s highest honor. For a number of years Leighty has directed the Journal Star’s Tournament of Bowling League Champions.