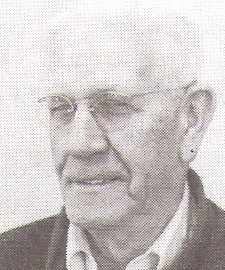 Biography:  Judson Wayne Jones had retired as sports editor of the Monmouth Atlas Review when Monmouth High School basketball coach Mike Mueller took over. Mueller had heard so much about Jud Jones he saw fit to nominate him for this award. “All I heard about since coming to Monmouth is about Jud Jones,” said Mueller. Jones was a standout high school athlete at Loveland, Colo., in football, basketball and track. He attended Monmouth College where he won letters in football, 4; basketball, 3; and track, 4.  He coached football at Staunton High School along with tennis. He served as Monmouth Sports Editor from 1956 to 1979. With help from Hank Stern and student help, Jones followed more than 30 high schools in his area along with Monmouth College and the Midwest College Conference. As a result, thousands of people listed him as a friend including school officials, coaches, athletes, and fans. Jones said of his Hall of Fame selection, “I never expected or worked for a Hall of Fame… I only tried to my job.”  Jud died in 1994 near the age of 91.