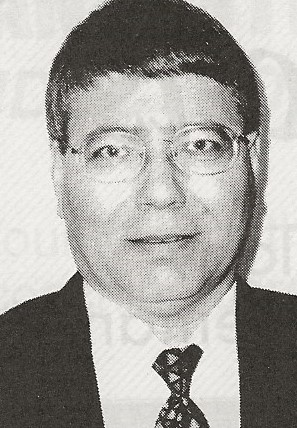 Biography:  Greenville Advocate sports editor Jeff Leidel was involved with high school basketball for 25 years at the time of his induction. After graduation from Southern Illinois-Edwardsville in 1975, Leidel worked four years at WILY/WRXX radio in Centralia.  During the 1976-77 season he described Clinton County football and basketball. The following season he became the radio voice of Centralia Orphans’ basketball and football and Centralia girls basketball. Centralia appeared in the first girls state basketball tournament in 1977 at Horton Fieldhouse in Normal and coach Ann Murray’s Orphan Annies brought home fourth place. Leidel came home with a tired throat. The Centralia station was the only one to carry all eight games of the first tourney and Leidel did all the play-by-play.  In 1979, the Greenville native returned home to the editorial staff of the Advocate and assumed all sports reporting along with his general news reporting duties. From 1979 to 1987, Leidel served as official scorekeeper for the varsity boys team. He joined the Comets Sports Boosters Club and served as co-president. In 1981, Leidel began a five-year term as sports information director for NAIA District 20.  Leidel has soft spots for the 1977 Greenville boys team of coach George Grubbs, as it won the school’s first regional in 13 years, and the first Greenville girls team in 1980 under Jim Moore as it advanced to the supersectional. Since his Greenville return, Leidel has coached Little League baseball and softball and one year of soccer. During the mid-1980s he was instrumental in establishing Junior Legion baseball in Greenville. Leidel’s professional and volunteer athletic contributions were recognized in 1997 by the Illinois Principals Association, Kaskaskia Region, with its Horace Mann Award. Leidel was also honored with his own day in Greenville in 2015.