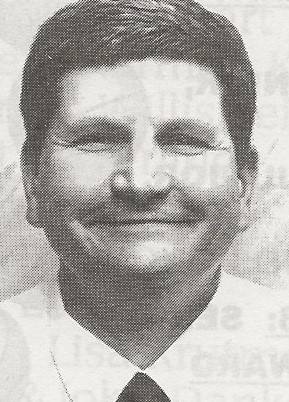 Biography:  Since his days as a fifth grader, Terry Todt’s goal in life was to be a sports announcer. Todt completed a two-year vocational radio broadcasting program at Lake Land College in Mattoon. Todt worked from March to May 1978 at WLBH AM/FM in Mattoon before ice toppled the station’s tower and destroyed its studios.  Todt was fortunate to gain a position in May 1978 at WSMI AM/FM radio in Litchfield, where he became the station’s program director. When he joined the station he was given the opportunity to broadcast high school sports. At the time the station aired 20 football, 60 basketball and a dozen baseball games. In his time as sports director those numbers swelled to where WSMI broadcasts nearly 200 sporting events a year. WSMI served 16 area high schools in Montgomery, Macoupin, Bond and Christian counties.  Todt said the highlight of his broadcasting career was following the Nokomis girls basketball team in 1998 to the IHSA Class A state championship game win over Carthage. A close second, quite naturally, would be broadcasting the Lady Redskins’ repeat in 1989 with an overtime victory over Carrollton. He also broadcast Hillsboros’ girls basketball state title in 2006.  Todt is also a member of the Illinois Softball Coaches Association Hall of Fame and was the Illinois Coaches Association Sportsman of the Year in 2011. Todt’s battle with a rare appendix-based cancer led to the 2018 formation of the T. Todt Shootout vs. Cancer, a 16-team event held at Carlinville High School with Todt doing the broadcasting. Todt died on May 23, 2019 at the age of 63.