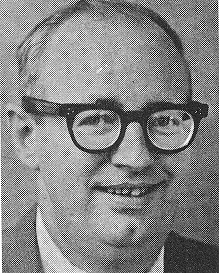 Arnold Irish was the sports editor of the Metro-East Journal in East St. Louis, IL at the time of his induction in 1973.  Arnold has won numerous awards as a sports writer and has greatly served Illinois basketball as a prep writer for many years.  A former AP prep panelist, Arnold’s series in 1967 entitled “Wonderful World of Collinsville Basketball,” won many awards.  He won the Illinois Press Association sports writing award in 1966, served as chairman of the St. Louis chapter of the Baseball Writers Association of America, and is a member of the Major League Hall of Fame selection committee.  Arnold is a graduate of Champaign HS and the University of Illinois.