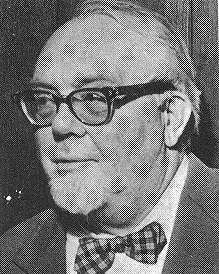 Dale Lancaster served the Aurora Beacon News for 47 years.  Dale was both a sports columnist and a writer of editorials.  He was associated with Illinois basketball almost since the beginning.  His contributions have contributed to our sports folklore and legends.  Dale is the only member (in 1973 at the time of his induction) of the Chicago Chapter Baseball Writers Association of America who never wrote for a Chicago newspaper.  He was honored by the University of Illinois in 1969 for outstanding service to the University of Illinois athletics.  A native of Aurora, Dale has a baseball field that was named for him in 1967 and has won three prestigious Copley Press Annual Awards for his sports stories. Dale passed away during June of 1977.