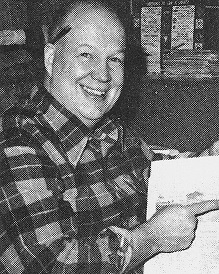 Biography:  “Looping the Loop” by sports writer Bob McBride was a feature of the sports page in the Henry News Republican beginning on Jan. 18, 1947 through his induction in 1975.  Bob began his sports writing career in 1943.  His interest and knowledge of local Tri-County and state sports was transmitted to his many readers through this most popular column.  Bob served as basketball and baseball coach at Henry HS for several years.  One of his protégé’s was the great Pekin coach, Marshall Stoner.  McBride started the very popular Henry HS alumni games that remained a fixture at the school for many years.  In addition to his sports writing abilities, Bob was a recognized official in various sports for over 25 years.