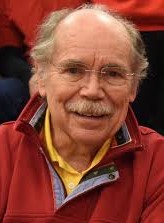 Biography:  An Atlanta, IL. native, Dave became one of the nation's elite sports jounralists after helping Atlanta High School to a 29-1 basketball season as a senior in 1959.  ( Atlanta HS became a part of the consolidation that created Stanford Olympia High School in 1972.)  Dave is the author of two books on basketball and received the Naismith Basketball Hall of Fame print media award for lifetime achievement.  Dave worked at The Lincoln Courier and The Bloomington Pantagraph before stints at The Louisville Courier-Journal, The Atlanta Constitution, The Washington Post, The Sporting News, and Golf Digest.  He has earned 13 Sportswriter of the Year awards over the course of his career.