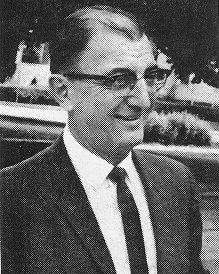 Biography:   Bill Bauler began a sports writing career in 1932 as a sophomore at Wheaton High School when he worked for the bi-weekly Wheaton Progressive.  He was sports editor for 20 years of the Wheaton Daily Journal before spending 1958-61 with the Glen Ellyn News and the Wheaton Leader.  In 1961, Bill joined the staff of the Aurora Beacon-News and teamed with fellow Hall of Famer, Dale Lancaster, to make the Beacon-News sports pages some of the finest in the state.  Besides his contributions to basketball as a writer, Bauler coached football, basketball, and baseball in the Aurora and Wheaton areas.  He helped to organize many of those leagues from the beginning.  Bill’s sports reporting was an institution to west suburban sports fans for many years.  William passed away in November of 1986.