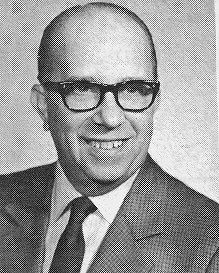 During the 40’s, 50’s, 60’s, and 70’s, if you found a high school or college basketball game in east central Illinois or west central Indiana and it was a good bet that Danville’s Max Shaffer or his radio station WDAN-WMBJ was there.  Max broadcast 33 consecutive state tournaments starting with 2 in Indiana and 31 in Illinois (a record at the time of his Hall of Fame induction in 1976 for broadcasters).  Shaffer has called the play-by-play for Danville HS, Schlarman HS, Danville JC, The University of Illinois and Purdue University.  With Shaffer, WDAN was the first station in the United States to broadcast a basketball game on a direct telephone line, a device all stations eventually used for decades to save money and bring our game to hundreds of thousands of their fans.  Max Shaffer died on April 11, 1993.