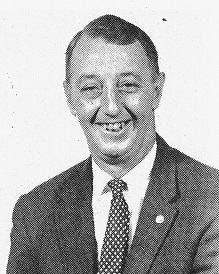 Paul Biebel is a graduate of DePaul University and was considered one of the top officials in the Midwest in the 1940’s and 1950’s.  He officiated on the prep level for over 30 years and was one of the premier officials in the Big Ten for over 15 years.  Paul was a life-long resident of Chicago upon his passing on December 22, 1989.