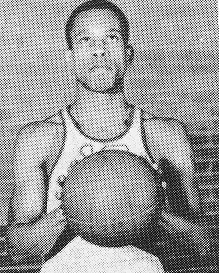 Biography:  John Richard Scott attended Centralia High School. Although a good high school player, it is his collegiate career that set John apart from others. He was the starting center for four consecutive Illinois Intercollegiate Athletic Conference championship teams for Illinois State University from 1939-42. Although not imposing at 6’1”, John is a member of the ISU Hall of Fame. He set a then school record for points in a career (910). When ISU defeated UCLA 37-21 in 1940, John scored as many points as the entire Bruin squad while limiting Jackie Robinson to only 2 baskets. A tremendous defensive player and rebounder, Scott was the floor leader for the Harlem Globetrotters for two seasons before entering the medical profession.