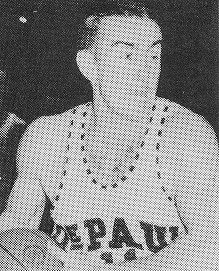 Jim Lamkin was overlooked by most college basketball recruiters when he graduated from (Chicago) St. Leo HS primarily because he played for the junior (or lightweight) division.  At that level, Jim achieved all city and all Catholic League player recognitions.  Lamkin traveled to the north side of the city after graduation to try his skills at DePaul University.  After four years of play, Jim ranked among the scoring leaders in that school’s history.  Even today, his name is on that list with Blue Demon greats Dave Corzine, George Mikan, Mark Aguirre, and Howie Carl.  For the 1953-54 and 1954-55 seasons Lamkin served as the team captain.  After college, Jim played for a few years with the Peoria Caterpillars of the AAU before returning to Chicago to serve as a high school coach.  He also worked as a college assistant at his alma mater for a brief time.  His high school stops were at Mt. Carmel, DePaul Academy and finally his alma mater, St. Leo.  Tragically we lost Jim to a Lake Michigan boating accident in the late 1960’s.  In 1978, Jim was also inducted into the DePaul University Hall of Fame.