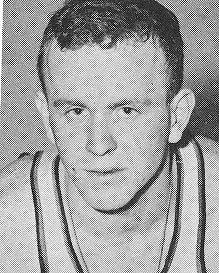 Biography:  Jack Stephens was a terrific player for (Chicago) Mt. Carmel High School. He completed four seasons of varsity basketball in 1951 as the school’s all-time leading scorer with 1,314 points (1,251 in his final three seasons). Jack was a semi-regular as a freshman but took control of the squad as a sophomore. He was the team’s leading playmaker and scorer for the next three seasons. As a senior, Jack was the captain of the team. After high school, Jack moved on to the University of Notre Dame. He was a standout for the Irish from 1951-55. He led the squad to the NCAA tournament in his sophomore and junior years. In his final game for the Irish, Jack tied the single game scoring record with 35 points. Jack also played one season for the Irish football team.  He was a Helms Foundation All-American player and runner-up to Tom Gola in the balloting for the most valuable collegian in the annual Harlem Globetrotter-College All Star tour. Jack’s coach, Johnny Jordan said of him, “He can do everything a basketball player should do—and does it well.” Jack was drafted in the 2nd round of the NBA draft by the St. Louis Hawks. He played for one season professionally. Jack Stephens passed away on August 31, 2011 at the age of 78.