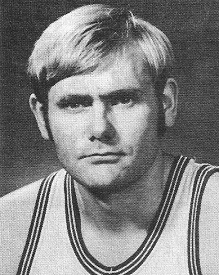 Biography: Greg Smith distinguished himself as one of East Aurora’s basketball greats by scoring 1,829 points in three seasons from 1970 to 1972 (note that this was 16 seasons before the 3-point basket rule entered high school basketball). In 1972 as the 6-5 center for coach Ernie Kivisto’s third-place finishers, Smith set a state tourney scoring mark of 112 points. While at East Aurora, Smith was a 61 percent shooter from the field and 81 percent from the free throw line. An honorable mention all-starter as a sophomore and junior, Smith was named to all-state teams selected by The Galesburg Press, Chicago Today, Champaign News-Gazette and the Associated Press his senior year. He was also named to the all-state tourney team and was named East Aurora’s most valuable player. His 895 points as a senior was one of eight individual records he owned when he graduated in 1972. Not only a scorer, Smith owned a season rebound mark of 480 and a career mark of 1,082. At Bradley University, Smith ranked 14th in scoring when he graduated in 1976 with 1,215 points. He was all-Missouri Valley in 1974 and led the Braves in free throw percentage three times and in scoring as a sophomore and as a junior. He was named to all-tourney teams in both the Lobo Classic and the Bradley Invitational. As a senior, Smith was co-captain of the Braves. Smith was inducted into the Bradley University Athletic Hall of Fame in 1981.