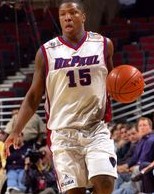 Biography:  Imari was a 3-time all-State selection an an All American Player as a senior at (Chicago) King High School.  He led King to the Chicago City Championship in 1998 and was his team's MVP for 3 straight seasons.  Imari finished his career as the state's #6 all-time scorer with 2,868 points.  He set a state record with 1,072 assists.  He averaged 32.2 ppg during his senior season.  After his prep career ended, Imari played for the DePaul Blue Demons for 2 seasons before declaring early for the NBA.  In 2010, the Chicago Pulbic League Basketball Coaches voted Imari into their Hall of Fame.