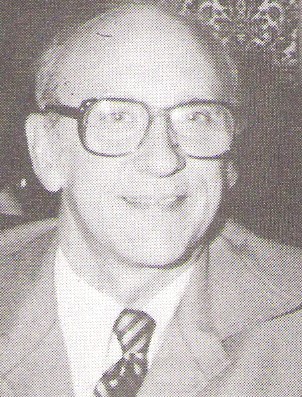 Biography:  The 1951-52 Hebron Green Giants with a pair of brothers, Paul and Phil Judson have long been bantered as a classic little district team for their State Championship effort and a 34-1 record. But there was also another glorious high school era in Hebron that has long been overlooked. In 1939-40 Hebron produced a state tournament entry which included a freshman named Howard K. Judson. That edition rolled to 30 straight victories before losing 31-30 to Lewiston at Huff Gym. Judson was a four-year standout at Hebron on teams which won three regionals and had a combined 112-14 record with Judson as a player. Judson was a second team all-stater as a junior and received first team honors as a senior when he scored 520 points on a team which was 27-3. Hebron lost to Dundee, when Judson was hospitalized, but avenged that loss in the regional 37-16 with Howie Judson in control. The Green Giants lost by four to Rockford West and then lost the regional championship by four points to Elgin, the eventual third place winner at the state. In all, Judson scored 1,388 points. He scored the winning basket in the first ever North-South All-Star Game. Judson went on to The University of Illinois where he was a regular for two years and one of those teams’ top scorers before he entered the Navy. Judson pitched major league baseball with the Chicago White Sox following the war. His high school basketball coach as a senior, Lester Harmon, says of Judson. “He was the kind of player who worked for perfection… it was like having a second coach on the floor at all times… he was rated the finest basketball player in Northern Illinois… and he never fouled out of a game.”  Howie Judson died on August 18, 2000.