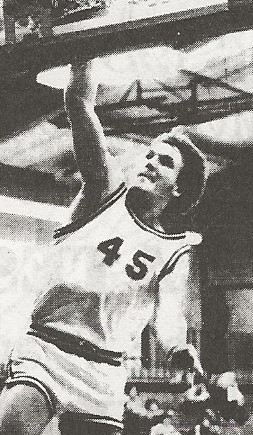 Biography:  As a sophomore at Prophetstown High School, Jeff Mosher became the sixth man on a team which was 21-0 in the regular season and finished 22-1. As a Prophetstown junior, Mosher started at forward for a 25-2 team which lost 55-44 in the Class A quarterfinals at Champaign. Mosher averaged 17 ppg and 10 rpg. On a 12-12 team as a senior, Mosher averaged 29.6 ppg and 13.6 rpg. When he graduated in 1974, he held two school marks for scoring and three rebounding marks. His single game 50 points and 23 rebounds in a 75-72 win over Morrison was a highlight of his senior year. An all-stater, Mosher played in the first IBCA All-Star game. At Rockford College, he averaged 16.7 ppg and 9 rpg as a freshman, 10.5 points as a sophomore, when he missed most of the season with an ankle injury, 17.7 points and 9.5 rebounds as a junior, and 22.3 points and 11 rebounds as a senior. He was an all-conference choice, freshman, junior and senior; a third team All-America for AP and Basketball Weekly and a member of a 12-man NAIA team which represented the U.S. in Australia. He was Rockford’s M.V.P. his junior and senior years; Athlete of the year at Rockford his senior year and received the President’s Sportsmanship Award. He and his wife Joan may be the first husband-wife team to be named to Hall of Fames in the same year, Jeff to the IBCA and Joan, who also played at Rockford, as the third woman ever to the Rockford College Athletic Hall of Fame.