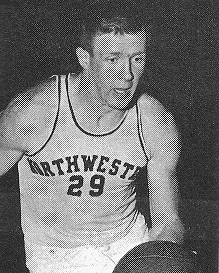 Jake Fendley was an all-state player in both 1946 and 1947 at South Shore HS.  Jake led South Shore, the first Chicago Public League team to advance to the state tournament.  He also was chosen as a Hearst Newspaper High School All American in 1947.  Jake then attended Northwestern University where he was a 3 year starter and an all Big Ten guard in 1951. Jake passed away on August 9, 2002.