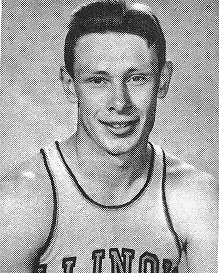 Rod Fletcher played at Champaign HS where he was an all-state player for the 1946 State Champs.  Later he played for the  University of Illinois and was named a consensus first team All-American player as a senior in 1951-52.  Fletcher led the Fighting Illini to two straight Big Ten Conference championships as well as two consecutive NCAA Tournament Final Four appearances in 1951 and 1952 alongside teammate John "Red" Kerr.  He was a two-time All-Big Ten selection in his three varsity seasons, and at the end of his collegiate career Fletcher was selected by the Minneapolis Lakers in the 1952 NBA draft, although he never played professionally.  Rod Fletcher passed away on December 21, 2017.