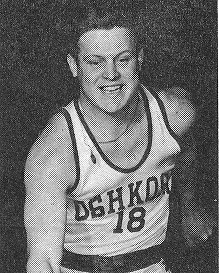 Eddy Riska graduated from DeLaSalle HS in Chicago.  From there he attended the University of Notre Dame where he was an All-American player in 1940.  In 1942, Ed was an all pro while playing for the Oshkosh All Stars.  He played professionally until 1949.  He then returned to DeLaSalle where he became one of the top coaches in the city, leading his teams to several league and city championships.  Eddy Riska passed away on August 3, 1992.