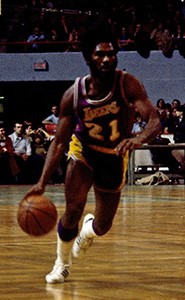 Flynn Robinson was one of the most outstanding players ever to play for Elgin HS in the 1950’s.  An outstanding outside shooter, Flynn attended the University of Wyoming where he was an all conference selection for 3 years.  After graduating from Wyoming, Flynn went into the NBA where he played for several teams including the LA Lakers, where he was a member of the 1971-72 NBA Champions.  Flynn Robinson passed away on May 23, 2013.