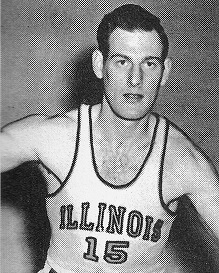 Biography:  Jack Smiley was a member of the famous University of Illinois Whiz Kids, that went 35-6 from 1941 to 1943, earning two Big Ten championships. The team voted to turn down an invitation to the NCAA tournament in 1943, after Smiley, Vance and Phillip were inducted into the military mid-season.  As an artillery corporal with the Army's 106th division, Smiley was engaged in one of the bloodiest skirmishes of the Battle of the Bulge- once firing his 105 mm Howitzer for 96 continuous hours. The 106th division suffered a 90% casualty rate in the skirmish.  Smiley returned to Illinois for the 1946-47 season and won team MVP honors.  After college, Smiley played two seasons in the NBA with the Fort Wayne Pistons, Anderson Packers, and Waterloo Hawks. He averaged 6.2 points per game in his NBA career.  Smiley also served as a player/coach for the Hawks for 27 games in the 1949-50 season and posted an 11-16 record.  Jack Smiley passed away on July 30, 2000.