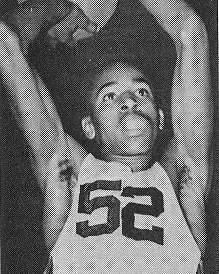 Biography:  McKinley Cowsen was a regular on the legendary 1954 Hall of Fame (Chicago) DuSable High School team even though he was just a sophomore.  In his three years of varsity play, “Mac” was All Chicago each year and averaged 20 ppg for his career.  These achievements earned him all state player honors for his senior year.  Then, “Mac” went to DePaul University to star for three years under the legendary Ray Meyer.  In college, he averaged 15 ppg and was the Blue Demon captain his junior and senior years.  After college, “Mac” returned to DuSable to coach for seven years and earn a 135-34 record.  Sadly, he passed away on September 26, 1973  of a fatal disease at the young age of 36—but not before leaving his mark in Chicago as a great athlete and a better human being.