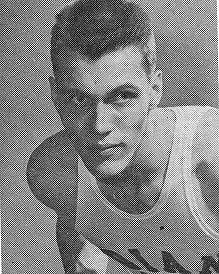 Biography:  Charles (Chuck) Kraak attended Collinsville HS and became an all-state player during his senior year under Vergil Fletcher averaging 19 ppg.  Chuck went on to Indiana University where he was a regular for three years and played on two Big Ten Championship teams in 1953 and 1954.  In 1953, Indiana won the NCAA Championship and Chuck was the leading defensive player and second leading rebounder on that team.  Passing up a professional basketball contract, Chuck made the army his career and had achieved the rank of Lt. Colonel of the United States Army at the time of his 1974 Hall of Fame induction.  Lt. Col. Chuck Kraak passed away on February 16, 2014 at the age of 81.