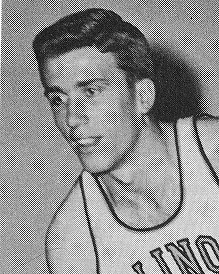 Biography:   Art Mathisen was an outstanding athlete and basketball player at Dwight HS, leading his team into the state finals in 1939.  Art went on to the University of Illinois where he became the regular center for the legendary “Whiz Kids”.  He was an Illini captain his senior year and made All Big Ten and All-American player honors that year.  He played on two Big Ten Championship teams at Illinois in 1942 and 1943.  In 1943, Art was chosen as a member and team captain of the College All Stars.  After his playing career, Art was a very good coach at Danville HS before moving into the principal’s job there.  Art Mathisen passed away on January 5, 2004.