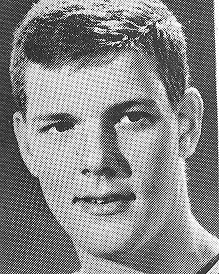 Biography:  Randy Crews was one of the most versatile athletes ever produced in the Kankakee area at Bradley-Bourbonnais High School where he set several of their basketball scoring records.  Randy was an all-state player in both basketball and football while also playing baseball at a very high level.  In basketball, Randy led his teams to a three-year record of 62-16 with a Sweet Sixteen appearance.  He then went on to the University of Illinois where he was a three-year regular (1967-70) and considered by many as one of the top defenders in the Big Ten Conference.  Randy also lettered in baseball for the Illini batting over .300 for each of his three years on the varsity.  As one of the Big Ten’s best sluggers, he played professional baseball for three years after college.