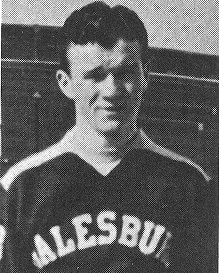 Biography:  Frank Leach was a three-year letterman for the Galesburg Silver Streaks.  He was the leading scorer his final two seasons and in 1929 was recognized as both an all Big Nine Player and an All State Player.  Upon his induction into the Galesburg HS all time basketball team by the Galesburg Register Mail, it was said that “He was feared and watched by every team the locals met, but he treated them all to scientific pivoting, faking and flipping of the ball through the hoop on long tries.”  After high school, Frank attended Illinois Wesleyan University where he lettered in football, basketball, baseball, and track.  Leach coached at Gridley, Mackinaw, Fairbury and Clinton.  At the time of his induction in 1975, he was the superintendent of Limestone Community HS in Bartonville.