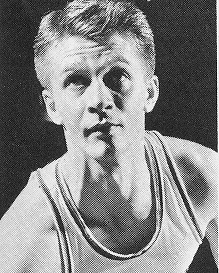 Biography:   William K. Mann was the scoring champion in the Chicago Public League as a senior at Austin High School where he once scored 44 points in a single game.  Bill was the team captain his senior year.  During his collegiate career at Bradley University, Bill scored 1,115 points and played in 137 games—both were BU records for many years.  Mann captained the Braves during his junior and senior seasons.  He was named the MVP in the 1950 Sugar Bowl Tournament and was a member of the All-Missouri Valley Conference squads in the same years.  Mann was named as an All-American player his senior year and played with the College All Stars.  "Billie" Mann died on August 22, 1993.