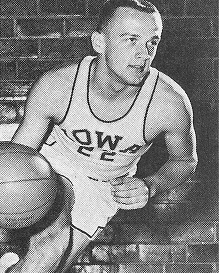 Biography:  Bill Seaberg was a member of the 1951 state runner-up Moline High School team as a junior.  The following season he was an all-state selection.  Bill played for the University of Iowa for three seasons.  In 1954 when he amassed an incredible 74% field goal mark for the season, Bill was an honorable-mention all Big Ten choice.  As a junior he averaged 13.4 ppg and as a senior posted a 15.8 ppg mark.  Both seasons, Bill was selected as an All Big Ten player.  Iowa ruled the Big Ten in 1955 and 1956 when Seaberg served as a co-captain.  In 1955 he was named to the Helms Athletic Foundation team.  In 1956 he set an Iowa’s one game accuracy mark from the field of 80%.  He was a unanimous all-time Iowa AAU team selection.