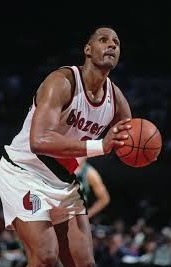 Biography:  Kevin was a 7-foot center who starred at (Dolton) Thornridge High School before accepting a scholarship at Eastern Illinois University.  He was a standout at EIU from 1982-86, setting the career rebounding record with 867 misses grabbed.  Kevin was taken in the 2nd round of the 1986 NBA draft by the San Antonio Spurs.  He was traded shortly thereafter to the Portland Trail Blazers.  There he was a 2-time NBA All-Star during an 11-year professional career.  Kevin died at the young age of 44 on August 25, 2008.