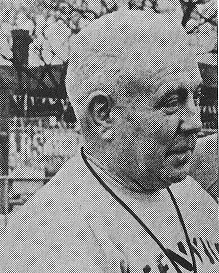 Biography:  Anthony “Tony” Lawless began his basketball career as a four-year captain for Peoria’s Spalding Institute, playing for legendary Sport McGrath.  In 1924 Spalding won the National Catholic Championship.  After high school, Tony attended Loyola University-Chicago.  He was a four-year regular under Coach Lennie Sachs.  Loyola and Lawless went undefeated for the 1929 season and were named by some publications as the National Champion (the NCAA tournament did not begin until 1941).  Between 1928 and 1929, Loyola set a then intercollegiate record when they won 23 straight games.  Before his career at Fenwick HS as head coach (1929-49) and athletic director, Lawless played pro ball for the Waukegan Capitols.  After his retirement from Fenwick, the gym was renamed in his honor.  Tony Lawless passed away in November, 1979.